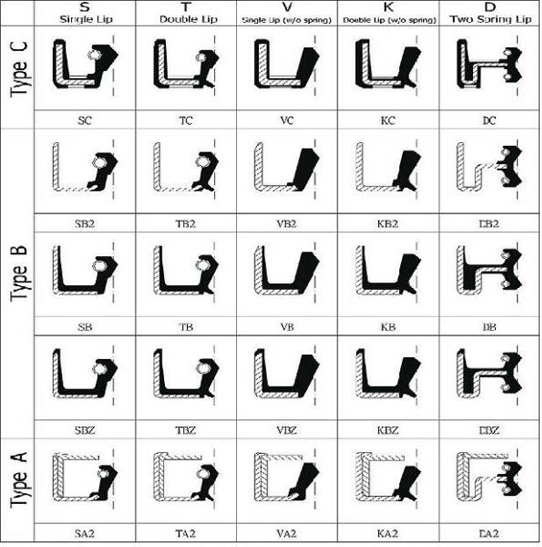 Radial shaft seals are used between rotating and non-rotating machine components the sealing lip of elastomer which provides dynamic and static sealing against the shaft. The lip has a sealing edge which is formed by pressing, cutting or grinding and is normally pressed against the counterface on the shaft with a defined radial force by a garter spring.

The edge of the sealing lip and the shaft counterface form the most important functional area of a radial shaft seal. The sealing effect of the lip can be enhanced by providing the contact area of the lip with hydrodynamic aids which may be designed for single direction operation, or for alternating directions of shaft rotation.

An additional sealing lip may also be provided to protect the sealing contact proper from dust and other fine solid contaminants. A suitable lubricant in the space between the sealing lip proper (primary lip) and additional (secondary) lip can reduce wear and delay corrosion. Where hydrodynamic aids have been provided it should be remembered that a pressure deficit can be produced in the space between primary and secondary lips which will increase the radial force.

This situation can be alleviated by providing breathing holes in the secondary lip. It should also be remembered that contaminants which have penetrated past the secondary lip will eventually cause damage in the counterface region. A build-up of heat can also occur between the two lips; this promotes premature wear.